You are here: Home / Archives for Eddie Chisham 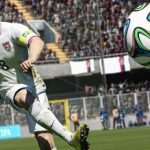 Yearly sports games are often criticized for either over-compensating changes or not changing enough (besides rosters). FIFA 15 is guilty of neither. Major problems that have plagued the franchise for years finally see their end as the game makes a major move toward realism. Animations Animations have been a growing part of the FIFA series. They are the source of great looks and awful frustrations. FIFA 14 had the most animations of all the games when it came out. When you would press a command button, it resulted … END_OF_DOCUMENT_TOKEN_TO_BE_REPLACED