You are here: Home / Blog / Disney Pixar’s Inside Out: Don’t Just Watch It, Play It 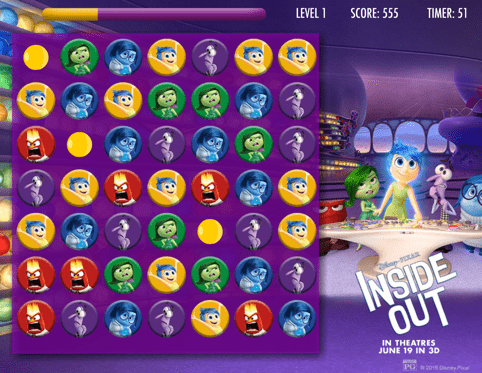 If you haven’t had the chance to see Disney’s Inside Out yet, now’s the time. We won’t spoil it for you, but if you’re a fan of learning through fun and funny emotional journeys then you’ll love Inside Out- probably one of Pixar’s most clever and though provoking creation yet. Kids and even adults are bound to learn something as they tag along Riley’s emotionally introspective adventure as she ponders through daily life with her five emotions– joy, fear, sadness, anger and disgust. Yet, while it might seem like you’re in for a rather sad ride (don’t worry though- Joy still proves she plays a central role in Riley’s decision-making process), Pixar has proven before that they’re not afraid to delve into the darker side of things.

Enough about the movie though. Let’s talk Inside out games. Test your memory skills, color Riley and her emotions’ anything you want; solve, spin, switch and sort puzzles taken from scenes of the movie or match all of Inside Out’s characters in a classic 3-match game- something Bejeweled and Mahjong match fans will appreciate. Play it via Poki or directly below!