You are here: Home / Archives for Free Games 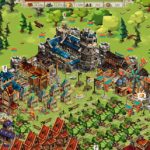 Goodgame Empire is an online strategy game in which you can build your own castle, create a powerful army and fight PvP battles on a dynamic world map. Goodgame Empire's premise is simple: crush your enemies, conquer the land and rise to the ruler of a mighty empire. You can play Goodgame Empire below for free, so what are you waiting for? Goodgame Empire is published by Goodgame Studios. The game is just one of several empire-style games the company has created and published for free online play. You can find other … END_OF_DOCUMENT_TOKEN_TO_BE_REPLACED