Say what you will about the Nintendo DS and DSi, but Nintendo’s portable gaming system remains the best-selling game system on the market today. It’s a virtual crime how many units the company’s sold, in fact — to the point that City Interactive has even made a game about it. Not really. But the company did just release Crime Lab: Body of Evidence for the DS, one copy of which we’re giving away for free.

is a single-player adventure-puzzle game that challenges players to stop a killer before he strikes again. Playing as FBI agent Nicole Bonnet, players must gather evidence and clues hidden within more than 300 puzzles and riddles made up of hidden object puzzle and mini-game formats. Additional features include over 60 fully rendered, detailed locations, FBI crime lab tools and DSi specific functionality. 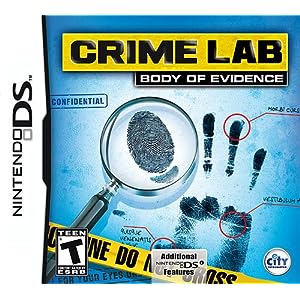 In the game, Young FBI agent Nicole Bonnet receives a mysterious package. Inside she finds a complicated mechanism that appears to be a message from a serial killer. This is just the beginning of an epic duel of minds between Nicole and the ruthless murderer, who leaves playing cards by the bodies of his victims as signature. Bonnet will have to use all her wits to solve the case and stop the killer before he strikes again. Does she have what it takes to understand the mind of a psychopath, as complicated as his puzzles? More important, do you? You’ll soon find out, if you win this brand new game.

To enter for your chance to win this brand-new Nintendo DS/DSi game Crime Lab: Body of Evidence, simply complete and submit the entry form below by 11:59pm PST on December 13, 2010. You can also double your entries if you follow DailyGame on Twitter and thus increase your chances of winning (after you follow us on Twitter, be sure to put your Twitter handle in the “Address Line 2” section below so we know who’s who). Anyone worldwide 18 years old or older can enter once per day per email address. Winners will be randomly chosen. Odds of winning vary based on the number of entries received, and you can increase your chances of winning by coming back to enter every day. Good luck.