You are here: Home / Movies / Blu-ray / Legend of the Guardians: The Owls of Ga’Hoole 3D Blu-ray Review 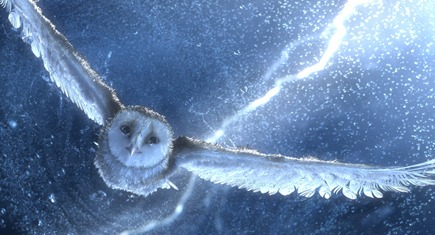 The number of tablets may have been the most deafening news out of CES this year, but the number of changes to the 3D TV landscape was impressive for those who paid attention. Vizio unveiled a lineup of more-affordable 3D sets. They announced their 3D TVs won’t require $150-per-pair glasses, but rather simple eyewear included with the set in a four pack. Other manufacturers announced future sets that won’t require glasses at all, but will display 3D images to everyone sans glasses a la the Nintendo 3DS. Still, 3D TVs are largely an “early adopter” luxury, which may inspire some people to raise an eyebrow when they see Legend of the Guardians: The Owls of Ga’Hoole as a new 3D Blu-ray from Warner Bros. After all, isn’t that a kids movie? And aren’t families a ways off on the 3D TV front, at least until the more-affordable TVs and TVs with a four-pack of glasses come out?

With its animated nature and coming-of-age story about a youthful owl, you could certainly make the argument that Legend of the Guardians: The Owls of Ga’Hoole is a movie for the younger crowd. But couldn’t you say the same about Despicable Me, Monster House and Open Season, all of which have also released in 3D Blu-ray? The fact is, most CG films now appeal to multiple generations, much like the old Looney Tunes cartoons did that by blending slapstick humor for the kids and double entendre that only mom, dad and the grandparents would get. Look at it that way, and you can justify your need to check this film out. Because checking out this 3D Blu-ray release is definitely something you need to do.

Since the 3D Blu-ray format debuted, the movie studios have apparently gotten more comfortable with coding, more adept at minimizing crosstalk and more precise in achieving a true sense of depth. So where Legend of the Guardians: The Owls of Ga’Hoole may not initially seem like a logical choice for 3D, its execution is impressive, with several scenes providing some surefire 3D showcase moments.

Even the film’s pedestrian moments show nice dimension, starting with the owls’ faces. Considering they’re not exactly toucans, the amount of depth achieved between the owls’ beaks and eyes is surprising, and the perception of distance from one wingtip to the other is impressive. The showcase moments, though, underscore the filmmakers’ understanding that — as was the case with the Clash of the Titans 3D Blu-ray — the best 3D effects often take place in slow-motion sequences when viewers can actually process the depth.

The first such scene takes place about one-third of the way through the film, when several owls dash through a cave a la a dogfight while chasing after a small bluebird. The scene mixes shots of the owls careening up or under rock arches with sequences that show debris being tossed behind the lead owl as an impediment to those behind. Multiple parts of this scene are accentuated by bullet-time like dramatic slowdowns that show off the impeccable 3D effects in the film. In fact, this single scene is far and away the best 3D moment I’ve experienced.

The second showcase piece occurs about three-fourths of the way through the film, when our would-be hero endures some intense flight training in the literal eye of a storm. Rain has always performed well in 3D Blu-rays, but the rain swirling through the tornado-like vortex in this scene is second to none, and as the owl’s wings slice through the sheets of moisture, it really seems like you could reach out and catch a raindrop on your palm.

Never in the film did I notice crosstalk, nor did I notice any scenes that didn’t have at least some dimension to them. Even the opening credits, when we showed the movie to some non-staffers for their independent opinion, caused them to literally gasp out loud at the image clarity and sense of 3D. Couple that with great surround-sound audio that complements the showcase scenes, especially, and there’s not a single shortcoming with Legend of the Guardians: The Owls of Ga’Hoole as a 3D Blu-ray Disc release. If you haven’t had the chance to experience this film yet but you’re an early adopter of 3D TV, definitely add this to your must-watch list as you try to persuade your friends to take the 3D plunge.

from Amazon.com. The pack includes the 3D, standard Blu-ray and DVD versions of the film.