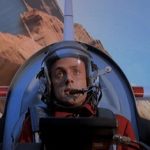 Image Entertainment has been one of the more prolific distributors of 3D Blu-ray movies since the format’s debut last year, so it’s not surprising that they’ve had some winners and losers. That’s just how the law of averages works. Their 3D Blu-rays have varied in scope, length and content, but they’ve all generally been home versions of IMAX films, as is the case with Ultimate Gs: Zac’s Flying Dream. This film is one of the earlier 3D IMAX movies — so early that it features a 10-year-old Michael Cera — which has a couple of implications for its modern audience. Unfortunately, those implications all boil down to “not so good.”

Ultimate Gs: Zac’s Flying Dream follows a boy who’s constantly reprimanded by his parents for almost killing himself while making and trying to fly home-brewed aircraft. He and a girl — but not a girlfriend — spend countless hours creating funky craft that almost universally fail. He can’t even operate a remote-controlled airplane at one point, and the older boy whose plane it was gives him grief and tries to “rob the cradle” by stealing the would-be girlfriend. After one semi-successful flight attempt, the film fast-forwards to the same boy in his late 20s, who’s now employed as a small-time stunt pilot, still works with the non-girlfriend girl, and is once again confronted by the older boy, who now flies military aircraft. The two men engage in a mock aerial dogfight, the older boy cheats, the girl discovers the cheating, and the small-timer wins the battle. In the process, he divulges that he loves the girl, she acts appropriately confused, but then they go off into the sunset to make aerial babies.

The second and more important miss with Ultimate Gs: Zac’s Flying Dream 3D Blu-ray is the quality of the 3D in general. Of the 37-minute movie, only about two minutes really have much sense of depth, and it’s more due to their 3D “gotcha” effects than anything else. The first gotcha comes in a hangar sequence in which the camera goes around one of the planes. Yep, you guessed it: the wing nearly pokes you in the eye. Although cheesy, the result is effective and reinforces that the filmmakers were trying to make people leave the theater with a few 3D-infused chuckles more than they were aiming for the Academy Awards. The second gotcha takes place during several short-lived cockpit scenes, where a macro lens manages to capture the entire cockpit in the frame and thus provide some decent instrument depth that translates well via the active-shutter glasses.

Almost every other sequence that was designed to show depth largely fails like 10-year-old Zac’s first attempts at flight. The most notable failure is the climactic aerial dogfight, which takes the camera through the Grand Canyon and tries to deliver some “wow factor” due to rocky outcroppings coming at you at high speeds. But there’s just no wow. The landscape moves too fast, the camera doesn’t get close enough to the rocks to deliver the foreground/background dynamism that best generates a 3D effect, and the pitch and yaw movement of the airplane distracts what little 3D you might think you see. In fact, these parts of Ultimate Gs: Zac’s Flying Dream 3D Blu-ray would probably make for a better D-BOX Motion Code experience than they do a 3D one.

Image Entertainment released two additional 3D Blu-rays at about the same time as Ultimate Gs: Zac’s Flying Dream, and I’ll have reviews for those up shortly. Again, the company’s been churning out 3D content like there’s no tomorrow, and they’re bound to have multiple losers to counterbalance every 3D gem. Here’s hoping the other two, both of which are documentaries, are a bit more on the gem side of things. Because Ultimate Gs: Zac’s Flying Dream 3D Blu-ray is definitely among the stinkers.