You are here: Home / Archives for Amazing facts about the GBA game 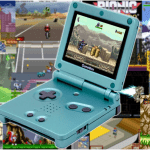 Facts You Didn’t Know About GBA Games GBA console was released in far 2003; at the time of launch in the US, the appliance cost $ 99.99 and was affordable not for every gaming fan. Technically, it was a 32-bit console of the sixth generation, with many cool features, improved visual and sound effects. On the whole, the design of the appliance was pleasing to customers and became a benchmark for the future generations of Nintendo products. The main innovation that gamers were waiting for was the front-lighting screen … END_OF_DOCUMENT_TOKEN_TO_BE_REPLACED