You are here: Home / Archives for battlestar galactica fans 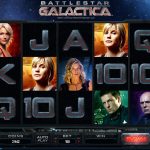 Battlestar Galactica TV series developed a cult following and most of the fans were quick to embrace the feature film as well. Now they have two more ways to enjoy the franchise in an interactive way, by playing the slot machine or the board game. There’s no better way to get fully immersed into the Battlestar Galactica universe than by playing these games. They brilliantly succeed at capturing the very essence of the TV series, so the fans are unlikely to find any frustrating discrepancies. Fight in the Second Cylon … END_OF_DOCUMENT_TOKEN_TO_BE_REPLACED