You are here: Home / Archives for Bixby defeats Owasso to win 6A1 Championship 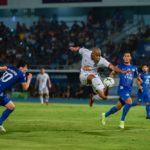 The 6AI State football championships were almost a walkover for Bixby, who triumphed over Owasso. However, Bixby's quarterback managed to wiggle his way through Owasso's defender and, with the help of their receiver, made the game a success. The University of Central Oklahoma Campus hosted the game in the Chad Richison Stadium on Friday, the 2nd of December 2022. The game's touchdowns were some of the smoothest well-played moves on the pitch. In one of the passes, Kirby duped his opponent into thinking he was … END_OF_DOCUMENT_TOKEN_TO_BE_REPLACED