You are here: Home / Archives for Bolt 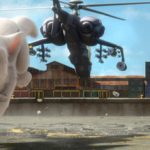 Bolt was one of a handful of animated movies I didn’t mind watching more than once. Sure, John Travolta voicing a superhero dog was funny, especially when you consider his owner was voiced by Miley Cyrus, but the narrative itself was decent enough that it warranted a couple of views. As a result, I was intrigued to see Bolt make Disney’s Blu-ray 3D release list this holiday season, because if the movie itself was worth a view, imagine what it would be like in 3D -- especially if the 3D effects were as expertly conceived … END_OF_DOCUMENT_TOKEN_TO_BE_REPLACED