You are here: Home / Archives for College football 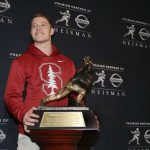 Four times in the history of the Heisman Trophy a player finished second one year and then won the award the next. Could Stanford's Christian McCaffrey join that group in 2016? He's the +450 Heisman sportsbooks favorite currently on college football picks. History Of Heisman Runners-Up One could make an argument that McCaffrey deserved the Heisman Trophy last year as he set the NCAA single-season record for all-purpose yards with 3,864, breaking the previous record set by former Heisman Trophy winner Barry Sanders … END_OF_DOCUMENT_TOKEN_TO_BE_REPLACED