You are here: Home / Archives for Dishonored 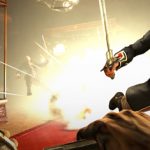 The Dishonored: Game of the Year Edition was announced today, with a release date that's coming up sooner than one might have expected. Bethesda Softworks today announced that the compendium will be available in North America on Oct. 8 and throughout Europe on Oct. 11. The Dishonored: Game of the Year Edition will ship for Xbox 360, PS3 and PC. It will cost $39.99 -- a fantastic deal. Dishonored was one of the more intriguing titles in 2012, a rare breed that sold well and met with good critical acclaim. The … END_OF_DOCUMENT_TOKEN_TO_BE_REPLACED

Dishonored: The Knife of Dunwall, the second batch of DLC pack for Bethesda's first-person action game, is now available worldwide via Xbox Live (800 Microsoft Points) and Steam ($9.99). The DLC will be available later today on the PlayStation Store for $9.99. In The Knife of Dunwall, gamers take on the role of Daud, the legendary assassin who killed the Empress, and have access to his weapons, gadgets, allies and supernatural abilities. After assassinating the Empress, and forever changing the fate of Dunwall, you … END_OF_DOCUMENT_TOKEN_TO_BE_REPLACED

Bethesda's new game Dishonored, a first-person game that includes some Deus Ex-like elements, is getting three new DLC add-on packs for Xbox 360, PS3 and PC. One will release in December, while the other two come in 2013. All Dishonored DLC will release at the same time on all three platforms; there will be no timed exclusivity. Dishonored: Dunwall City Trials, being released in December for $4.99 (or 400 Microsoft Points), will include 10 challenge maps that will test and track your combat, stealth and mobility … END_OF_DOCUMENT_TOKEN_TO_BE_REPLACED

One of the games we'll see at E3 next week, Bethesda Softworks' Dishonored, now has an official release date: October 9. Dishonored is a supernatural assassin action game being developed by development at Arkane Studios and slated for release on the Xbox 360, PS3 and PC. The game will ship in Europe three days later. Dishonored is set in Dunwall, an industrial whaling city where steampunk- inspired technology and otherworldly forces coexist in the shadows. You are Corvo, the once-trusted bodyguard of the beloved … END_OF_DOCUMENT_TOKEN_TO_BE_REPLACED

The Games we can’t wait to Play on PS5