You are here: Home / Archives for division 2 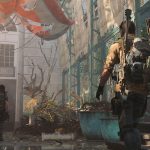 Division 2 is an amazing game. Whether it’s the action, the interesting missions or the realistic visuals, it’s a game that never fails to impress. But even such a game, like all others, isn’t invulnerable to bugs and stuttering, and the fact doesn’t change even while using top-notch hardware and graphic cards. Stuttering, or micro stuttering as it is called because of how short it lasts, is a common problem and one that isn’t really of consequence apart from some inconvenience. The game freezes, albeit for just a … END_OF_DOCUMENT_TOKEN_TO_BE_REPLACED