You are here: Home / Archives for European soccer championship of american 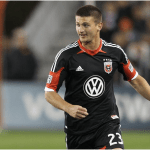 Since soccer has become one of the most popular and visited game in United States for recent decades, interest in strong American players abroad has increased. Moreover, in order to be competitive on the World Soccer Cups, national team of USA needs experienced players who play in strong European leagues. Remaining a land where soccer game was invented, Europe offers numerous possibilities for Americans who tend to reach popularity, and become successful soccer pros. The interest in Americans also increased during … END_OF_DOCUMENT_TOKEN_TO_BE_REPLACED