You are here: Home / Archives for Gameloft 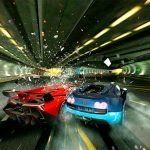 Google's Keynote showcased several new gadgets, including the Chromecast dongle that enables Internet TV and the Nexus 7 tablet, which will be the first device to get Android Jelly Bean 4.3. During the demos of the latter, attendees got their first look at a few Nexus 7 games, including Gameloft's upcoming mobile game, Asphalt 8: Airborne. There's a good reason Asphalt 8 was chosen to demonstrate the potential of Nexus 7 games: Gameloft worked directly with Google to optimize it for the Nexus 7. According to … END_OF_DOCUMENT_TOKEN_TO_BE_REPLACED