You are here: Home / Archives for heads arena euro soccer 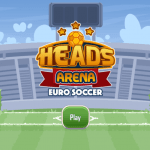 Since the release of NBA Jam in the 1990s, millions of gamers have enjoyed playing arcade sports games with big-headed athletes. After all, arcade machines offer many benefits over traditional sports simulations, including easy controls and constant action. Several developers have followed in the footsteps of Midway’s NBA Jam series, offering similar titles for different sports. Heads Arena: Euro Soccer is a brand-new browser game that hits the mark on all fronts. Available for computers and mobile devices at Poki, … END_OF_DOCUMENT_TOKEN_TO_BE_REPLACED