You are here: Home / Archives for impact of popularity of eSports gaming industry 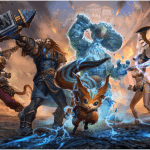 Uniqueness of ESports ESports environment is full of tempting possibilities spend time participating in best possible games as StarCraft II, Call of Duty, Heroes of the Storm, Hearthstone, Overwatch as amateur or take part in well-known tournaments - the Battle.net World Championship Series, Smite World Championship, the International or the League of Legends World Championship as a professional player and win staggering amount of money that sometimes comes close to 1 million dollars. Apart from purely … END_OF_DOCUMENT_TOKEN_TO_BE_REPLACED