You are here: Home / Archives for Impressions 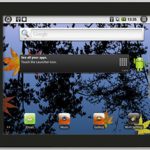 Tablets have taken America and Western Europe by storm, a blaze that Apple began with the first iPad, Google fueled with its Android OS and Amazon whipped-up into a virtual forest fire of handheld computing goodness with the Android-based Kindle Fire last holiday. Amid the tablet fever, a company called Leader International released a new 10-inch tablet called the Impression 10, an Android-based system that seems to have all the inputs, outputs and affordability to make you stand up and take note. There's just one … END_OF_DOCUMENT_TOKEN_TO_BE_REPLACED