You are here: Home / Archives for Insomniac Games 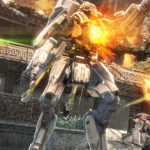 Insomniac Games has expanded well beyond the Ratchet & Clank franchise during this console generation, beginning with the PS3’s Resistance: Fall of Man and continuing with their newest game, Fuse. Published by EA, Fuse marks Insomniac’s most public multiplatform escapade, shipping on Xbox 360 in addition to the developer’s traditional PlayStation home. But even with several consoles to call its own, Fuse is grounded in the basic hallmark of Insomniac’s games: surprisingly deep gunplay. As with many shooters today, the … END_OF_DOCUMENT_TOKEN_TO_BE_REPLACED 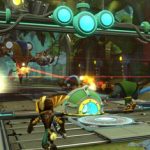 Every now and then a piece of entertainment comes along to remind you that you’re not a kid anymore. I recently got that reminder from Ratchet and Clank: Full Frontal Assault. The visual style is very cartoony, which in and of itself is fine, but when paired with “LOLs (pronounced ‘ell-oh-ell’)” in the dialogue it just makes me feel old. The gameplay is easy enough, mostly being a combination of tower defense and platform for single or multiplayer, both locally and online. You can play as Ratchet, Clank or their Zap … END_OF_DOCUMENT_TOKEN_TO_BE_REPLACED

I don’t officially know whether Ted Price, founder and president of Insomniac Games, is a member of the NRA. I've never actually asked him, nor have I inquired with anyone else at Insomniac. But for as much as Insomniac has focused on guns, I wouldn't be surprised if there's a relationship there. Whether you're talking about Ratchet and Clank or Resistance, Insomniac’s gameplay lives and dies by guns and their various modes of fire. But if you think you've seen the epitome of gun-focused gameplay from Insomniac, think … END_OF_DOCUMENT_TOKEN_TO_BE_REPLACED 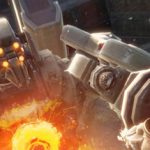 Insomniac Games' founder and grand poobah Ted Price was speaking at PAX Prime last weekend, and amid all the topics he covered a quick image flew by that didn't exactly look like a game from their current library. No Resistance. No Ratchet and Clank. Certainly not the first Spyro. For that matter, the art style didn't even look like the previously announced Overstrike. What on Earth (or off it) could it be? It sounds like we'll find out in the not-too-distant future. I recently received an email along with a teaser … END_OF_DOCUMENT_TOKEN_TO_BE_REPLACED