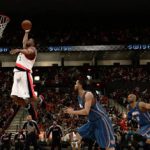 There was once a day when basketball fans had their choice of video games, choosing between arcadey titles and simulations. That landscape has since dwindled to the point that there are now only two options, one of which (NBA Ballers) is as much gimmick as it is serious contender. As a result, NBA 2K13 has a lot riding on its virtual shoulders, and although it bears that load well, it’s far from a one-size-fits-all game. In fact, NBA 2K13 reaches a new level of simulation that leaves anyone looking for a … END_OF_DOCUMENT_TOKEN_TO_BE_REPLACED