You are here: Home / Archives for New world preview 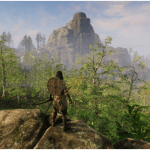 The last few days have seen hundreds of thousands of players testing Amazon’s first big step in to the world of MMORPG’s with their new title New World. The current release of the game is a preview that is somewhere between the alpha and beta stage of the game, and with the beta set to come early next year, the preview is a good indicator of what to expect from the game – and although a little mixed from many users, early signs are already looking good on the review front. It does stray somewhat from the typical … END_OF_DOCUMENT_TOKEN_TO_BE_REPLACED