You are here: Home / Archives for open world 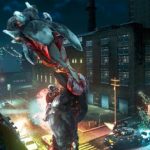 The sandbox genre of games has seen its fair share of entries since GTA III first cracked the open-world code. Although some would argue the Grand Theft Auto series has been the only one to do it right, that would be doing at least a half-dozen other games a serious disservice. Prototype, for instance, released three years ago to serious praise, with an anti-hero shapeshifter as the main character granting players the brutal ability to consume victims in order to gain their appearance and abilities. The sequel, … END_OF_DOCUMENT_TOKEN_TO_BE_REPLACED