You are here: Home / Archives for play set 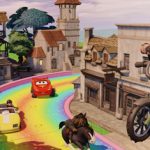 Remember when a certain open-world game caused parents, Congress and several national governments to scream in disgust? Those days seem far behind us, with sex and violence now the virtual norm. In light of that, I wanted to go counter-culture and celebrate not the release of GTA 5, but the triumph of the best family game of 2013 so far: Disney Infinity. This Disney Infinity review may be late, but it’s intentionally so. I wanted to see whether this new franchise in particular continued its momentum well after launch. … END_OF_DOCUMENT_TOKEN_TO_BE_REPLACED