You are here: Home / Archives for real drill in Minecraft 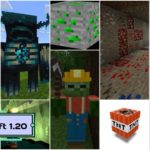 Explore underground spaces where a lot of new ores have appeared and by all means create throwing dynamite and a drill. Minecraft PE 1.20.0, 1.20.10 and 1.20: Full Version The developers of Mojang Studios paid special attention to the graphical component of the game, as well as its stability. Also in Minecraft 1.20.0 Update, there will be more opportunities for space exploration, as well as mining. It is worth noting that a new dangerous mob has appeared underground. It is worth preparing well before exploring … END_OF_DOCUMENT_TOKEN_TO_BE_REPLACED