You are here: Home / Archives for Review of Blackmoor 2 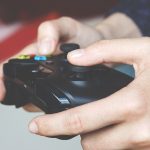 Developed by the studio Four Fats, Blackmoor 2 is a fantasy arcade platformer with hack and slash elements that is a sequel to Blackmoor 1: Dunberry’s Quest, the game is free to play with in-game purchases and was released on 1st November for the IOS and will be released on December for Android. The game story takes place 3 years after the events of the first game and it continues the story further but players don’t need to have played the first installation to know what is going on. The game has a cartoonish look … END_OF_DOCUMENT_TOKEN_TO_BE_REPLACED