You are here: Home / Archives for Runescape3 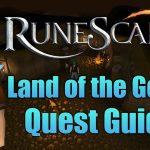 The Pirate Quests line is one of the most popular quests among RuneScape players. They can also be tedious, either because they’re tough or boring. Heck, it can even be confusing at times. That’s why there’s no shame if you look for help online, and here it is. Unfurling the Sails There are eight quests in total under this quest line. Six of them must be completed in order, and two are not part of the quest line, but also involve pirates and are needed to unlock two of the quests from the main line. We will, however, … END_OF_DOCUMENT_TOKEN_TO_BE_REPLACED