You are here: Home / Archives for screenshots 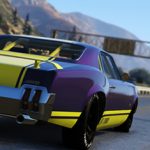 Several gamers joked that GTA V was the only game that mattered at E3 2013, even though new screenshots never hit the Web and the game itself didn’t even make an appearance. For those gamers, we have some great news: Rockstar Games has released 11 new GTA V screenshots with the theme of “The Fast Life.” As you can see from these new GTA V screenshots, the mix of vehicles in Rockstar’s forthcoming open-world game is impressive, spanning air, land and sea. But even within each of those groups, there are plenty of … END_OF_DOCUMENT_TOKEN_TO_BE_REPLACED

As longtime site readers know, I'm a huge Disney Parks fan, and I'm raising my kids to be the same. This weekend at PAX Prime, Disney unveiled a new area of Disney Epic Mickey 2: The Power of Two that's inspired directly by Frontierland when it opened with Disneyland in 1955. Called "Fort Wasteland," the new in-game area makes overt references to long-since-gone rides such as the Mine Train Through Nature's Wonderland, as well as still-standing relics such as Fort Wilderness on the area formerly known as "Tom Sawyer … END_OF_DOCUMENT_TOKEN_TO_BE_REPLACED

EA today released some newest screenshots for Shadows of the Damned, a psychological thriller being developed with Suda51 (No More Heroes) and Shinji Mikami (of Resident Evil fame) both at the helm. Shadows of the Damned is slated to release in June for both Xbox 360 and PlayStation 3. In Shadows of the Damned, gamers assume the role of Garcia, a motorcycle-riding demon hunter whose love is kidnapped by demons that Garcia must overcome as he explores the farthest reaches of the netherworld. As the story unfolds, … END_OF_DOCUMENT_TOKEN_TO_BE_REPLACED

5 Tips For Getting Better At Madden NFL 22

How New Gaming Streamers Get Up & Running