You are here: Home / Archives for Sell CS:GO Skins 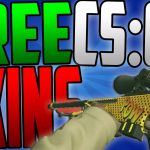 Counter-Strike is one of the most known first-person shooting games. Even though the first game was released in 2000, CS can grab new players and keep an active community around the game. There are many reasons for this, but the most important thing is innovation. There’s always something new in the CS universe. Whether we are talking about new mechanics, maps, characters, weapons, there’s always something that excites players. CS:GO has retained its popularity even though it’s been out for a while. One of the … END_OF_DOCUMENT_TOKEN_TO_BE_REPLACED