You are here: Home / Archives for smartphone 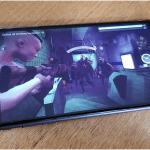 Asus launched its fourth-gen ROG phone after a lot of speculation and named it Asus ROG 5 because number four is considered unlucky in Chinese culture.  It is a powerhouse and without a doubt one of the best gaming phones available in 2021. It is a dream for many gamers to own this phone and have the best gaming experience. A good gaming phone allows you to have a full-blown gaming experience on a small device and the privilege to move around with your gaming companion. This gaming beast has a plethora of features … END_OF_DOCUMENT_TOKEN_TO_BE_REPLACED

HTC and Verizon have a long-standing Android partnership (hello, Thunderbolt), but the companies are set to release a new Windows Phone on June 2 that should entice people who also happen to own an Xbox 360. Why? Because if you buy the HTC Trophy from Verizon before July 15, you'll be eligible to receive a free Xbox 360 game. Anyone who buys the HTC Trophy from Verizon before that date can choose one game from a group of several popular titles, not the least of which are Halo Reach, Kinect Sports and Lode … END_OF_DOCUMENT_TOKEN_TO_BE_REPLACED