You are here: Home / Archives for Social gaming 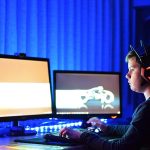 It was only a couple of years ago that a concept called Social Gaming began to take shape. With a picture of an elderly lady sitting by her computer ploughing and planting at FarmVille being the immediate association to social gaming, such a notion could not be further away from the true meaning of this phenomenon. Social gaming has moved on from sending and receiving the never-ending Facebook invitations to play FarmVille, Bubble Safari or even Texas HoldEm, which remain as some of the most popular games played … END_OF_DOCUMENT_TOKEN_TO_BE_REPLACED