You are here: Home / Archives for title wining Cavs 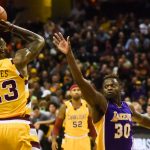 If they didn't have one last season, this year will see the Cleveland Cavaliers with a huge target on their back. Having upset the odds and won the NBA Finals for the first time, the Cavs will now be expected to make the finals for a third season running, where they will be hoping to defend their crown and further enhance their place as the dominant force in the NBA. As well as tying down some of their key players, Cleveland have also managed to add a couple of very interesting names to their roster - and it's no … END_OF_DOCUMENT_TOKEN_TO_BE_REPLACED