You are here: Home / Archives for Toy Story 2 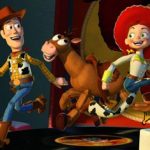 Pixar is always one to make evolutionary leaps in technology, with subtle changes between in films that somehow make all the difference. Yet when it comes to the Blu-ray 3D presentations of Toy Story and Toy Story 2, the jump is more drastic than any Pixar has taken to date. The straight-up graphical improvements cannot be denied, but it’s the little nuances between the first and second outings of Buzz Lightyear and Co. -- things like depth of field and improved animations -- that help make the 3D effects so much more … END_OF_DOCUMENT_TOKEN_TO_BE_REPLACED