You are here: Home / Archives for Worms Revolution 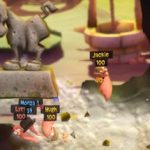 For a little over a week now, I’ve spent my free time blowing up, crushing, drowning and tossing oversized inanimate objects to explode worms -- and I had a ball doing so. Don't be quick to judge me as a narcissistic lunatic just yet! I did all this through the latest Team 17 release “Worms Revolution,” which is currently available for PC, Xbox 360 (via Xbox Live Arcade) and PS3 (via PlayStation Nework). Anyone who hasn't given a Worms title a chance is missing out on some thrilling and addicting gameplay, and Worms … END_OF_DOCUMENT_TOKEN_TO_BE_REPLACED