You are here: Home / Archives for X-Men 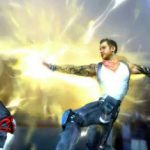 Silicon Knights doesn’t exactly have the best track record on the current hardware generation. They’ve had their success in the past, but Too Human for Xbox 360 -- designed to be a trilogy -- hasn't even had a sequel announced, and there’s a large contingent who will greet such news with a yawn. They could’ve made up some ground with X-Men Destiny, an action RPG that isn’t tied to a movie and instead lets players build up their own X-Man. But rather than make up any ground, X-Men Destiny falls flat upon it. The … END_OF_DOCUMENT_TOKEN_TO_BE_REPLACED