You are here: Home / Features / House of the Dead: Overkill Review 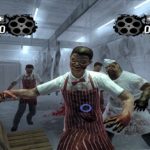 In sticking with the stereotypes that the Nintendo Wii has, it was pretty ballsy to release The House of the Dead: Overkill exclusively on that console, but it made perfect sense as that was the best system at the time to have the best representation of a light gun game. Now here we are more than two years later, and Overkill is coming in glorious gory HD and 3D to the PS3.

The premise is amazingly simple – it’s prequel to House of the Dead, the classic light gun game that was a staple of arcades in years long gone and gone are the fancy tricks that have been introduced over the years. This means, no needing to point outside the play area to load, no unnecessary shaking of the controller, and no odd cover mechanic that games like Time Crisis employ. It’s straight up shooting, and you’ll be doing a ton of it in this great grindhouse thriller.

The game is setup in a series of short episodes, each introduced by a narrator straight out of exploitation film reels and featuring names such as Creeping Flesh and Ballistic Trauma. Each of the nine episodes takes you through a roughly 15-30 minute balls to the walls action filled romp ultimately pitting you against the boss of that realm, be it the freaks from the Carnival in Carny, or the Grudge inspired Screamer.

It’s a little strange to have been so entertained by a very basic light gun shooter – but the presentation is so perfect that everything in the game just click together with precision. The grunge narration, the film scratch, the 70s inspired intermission placard the excessive violence and amazing amount of foul language all just work. Yes, even the insane volume of swearing in the game seems to work with the overall package – while some games get blasted for trying to shoehorn in foul language just for the sake of it (See Bulletstorm), it just seems to fit perfectly in the game setting. It’s a blast watching the cutscenes and listening to Detective Washington spout off about how sharing one’s choice in music is a personal thing that shouldn’t be shared until you know someone well – liberally sprinkled with F-bombs throughout the monologue, and that made me want to see more cutscenes. Sadly, each cutscene only signaled either the beginning or end of an episode – so there was always a little sadness when you ran into a new run at the completion of a chapter.

Once you beat the story mode, a directors cut opens up which slightly alters the levels in terms of difficulty and number of mutants (not zombies) – so that will help drive people to keep playing. Leaderboards also are included so seeing the massive scores beside my paltry ones was incentive to start aiming better and building up the kill combos for more points. Naturally, there is a ton of stuff to collect in the game; 3D models, comic pages, audio tracks it’s all here and hidden within the levels. Additionally, there are a couple of minigames included to help encourage more playtime.

Naturally, this title is best played with the Move setup – as that very nicely mimics the lightgun gameplay style. But for those without, or with just one Move controller it is possible to play this with a standard PS3 controller. Possible – but not nearly as fun.

Again – I was completely blown away by how much fun this game offered, as the style generally isn’t that appealing to me. The experience here is the real deal sealer – if you’re a fan of explotation films, gratuitous violence and gore then this game is the one for you. Hell, even turning on the anaglyph 3D was a great experience as the game seemed even campier than before with the cut rate 3D visuals. But in reality all that did was make me want to check out a true 3D tv for gaming.