You are here: Home / Finances / Big Data and POE Currency: When Is the Best Time to Buy Orbs?

Hello, Exiles! XXXX here, once again sharing some tips for Path of Exile (POE). Today, I’ll be answering the question: When is the best time to buy POE Orbs? The simple answer is anytime you need them for something in-game, but if you really want more bang for your buck, pay close attention. I’ll be sharing some stats that influence pricing based on recent expansion announcements and releases that shows the best and worst times to buy orbs. I’ll also show some stats on how the quantity of orbs purchased at one time also influences pricing and note the most cost-effective amount to purchase. Finally, I’ll share a few fun facts from the data provided to me that I found to be quite interesting. Let’s get into it!

Price vs. Expansion and League Releases

The average cost per orb is directly affected by when expansions are announced or released. Observe the following chart:

On its June 3, 2016 release, the average price per orb skyrocketed to $5.00 USD. One theory I have for this increase is that the trading economy was disrupted because prophecies in the league can be sealed and traded to other characters. Also, so-called “Fated” uniques are only available through prophecies, which could influence the average price. After a week, prices started to stabilize to the $3.00 USD mark, before falling further back to the $1.00 USD mark by the end of the month. 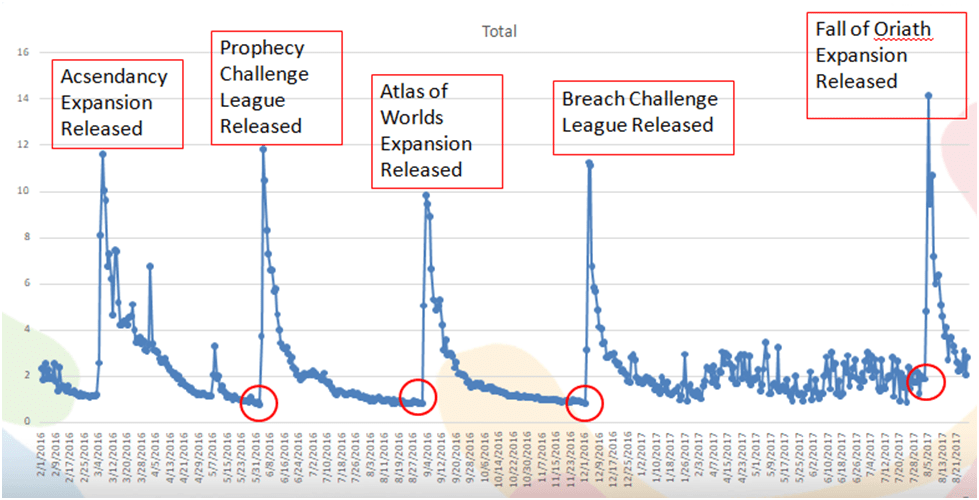 The horizontal axis notes the date, and the vertical axis notes the orb pricing. You can see from the above that a pricing pattern exists. Prior to the expansion’s release, the price of orbs falls to its lowest levels, indicated by the red circles. When the expansion or league releases, prices skyrocket. This pattern has been quite consistent for the last year and a half, so it’s hard not to imagine the same effect happening when the next league or expansion will be released. From the data above, the best times to buy orbs would be a week or two before the release of the expansion or league.

Expansion and league releases aren’t the only factors that can influence the price of orbs; the quantity purchased at one time also affects. Check out this chart:

The data provided to me for the above analysis on pricing were given to me by PlayerAuctions. From their data, I’ve also noticed the following, which I found interesting:

If you’re looking to take advantage of the stats above, I suggest you take a look at PlayerAuctions’ POE currency market.

See you on the battlefield!