Nothing says “happy holidays” like a free video game, and nothing says “brain-testing game show” like an episode of Jeopardy! But when you mix the two, a video game and the Jeopardy! game show, you get THQ’s latest entry on a Nintendo console: Jeopardy! for the Nintendo Wii.

With Jeopardy on the Wii, you and your family can enter the studio and take up the signaling button on America’s favorite quiz show. In this re-creation, players take on the role of contestants battling for cash as they tackle categories both familiar and foreign, always remembering to phrase answers in the form of a question. Mirroring the TV show format, the game features support for one to three players, allowing the whole family to play. Two players or fewer can take-on AI opponents as they uncover the 2,400 clues built into the game. 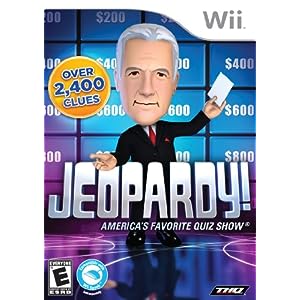 We’re giving away one copy of the game for free. Care to win it? To enter for your chance to win this brand-new Nintendo Wii version of Jeopardy!, simply complete and submit the entry form below by 11:59pm PST on December 16, 2010. You can also double your entries if you follow DailyGame on Twitter and thus increase your chances of winning (after you follow us on Twitter, be sure to put your Twitter handle in the “Address Line 2” section below so we know who’s who). Anyone worldwide 18 years old or older can enter once per day per email address. Winners will be randomly chosen. Odds of winning vary based on the number of entries received, and you can increase your chances of winning by coming back to enter every day. Good luck. And remember to check out all our other free contests right here.