You are here: Home / Contest / Shrek the Halls DVD Sweepstakes

A farting ogre doesn’t exactly conjure images of a family sitting by the fire sipping cocoa and opening gifts, but who are we to judge? Apparently, we’re nobody, as Dreamworks has just released Shrek the Halls

on DVD, a 22-minute film that follows Shrek, Fiona, Donkey and the gang as they celebrate the holidays Shrek style. In fact, just to show that we’re open to holidays of all types — ogre, donkey and half-frog — we’re giving away five brand-new copies of Shrek the Halls on DVD.

In Shrek the Halls

, Shrek wants to throw the perfect Christmas for Fiona and the kids, but he’s no real idea how to do it. So, he starts at the local bookstore to do some research, but eventually becomes so focused on doing the holiday “by the book” that he fails to notice the magic unfolding all around him. The film is full of references to holiday classics like “It’s a Wonderful Life,” and the bonus features include an animated sing-along “Twelve Days of Christmas” featurette and several holiday games. 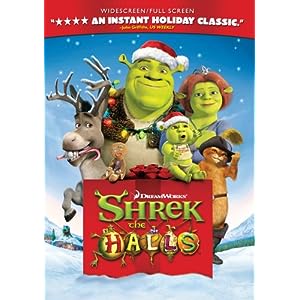 , complete and submit the entry form below by 11:59pm PST on January 10, 2011. You can also double your entries if you follow DailyGame on Twitter and thus increase your chances of winning (after you follow us on Twitter, be sure to put your Twitter handle in the “Address Line 2” section below so we know who’s who). Retweets are always nice, too. Anyone worldwide 18 years old or older can enter once per day per email address. Winners will be randomly chosen. Odds of winning vary based on the number of entries received, and you can increase your chances of winning by coming back to enter every day. Good luck. And remember to check out all our other free contests right here.