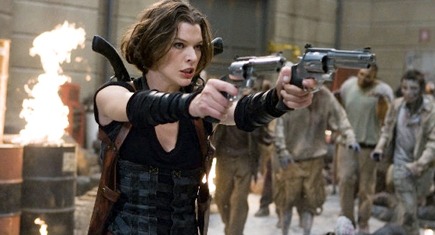 It’s not common to hear about a movie filmed natively in 3D. In fact, only two spring immediately to mind: Avatar, which single-handedly threw the world into the latest 3D craze, and Resident Evil Afterlife, whose director surprised everyone by using expensive 3D technology on a franchise that’s arguably designed for a niche audience of gamers and Milla Jovovich fans. Plenty of other films have appeared on the 3D Blu-ray format, but they’ve almost all been retrofitted, if you will. Not Resident Evil Afterlife. But as unexpected as that 3D info may be, even more unexpected is that it isn’t even the best-looking 3D Blu-ray presentation I’ve seen.

The film opens just fine, with some great 3D rain effects as an infected resident ponders her next victim on a bustling Tokyo sidewalk. The marginal depth of field in the opening scene, however, is a subtle warning that the 3D may falter in places — and those places end up appearing much more regularly than desired.

To understand where the 3D potential and issues both lie, you need to understand the plot. A deadly virus has killed just about the entire known world, and for four years the soldiers and scientists of the Umbrella Corporation — who just so happened to be responsible for releasing said virus — have been working in a massive underground complex to avoid infection and an untimely demise. Enter Milla Jovovich, whose ninja-like (and infected) character comes to wreak havoc on the organization that created her and, in the process, eliminate the “super infected” man in charge. Lots of combat ensues, a few survivors put up a valiant effort (with Jovovich’s help) to find safety, and the evil corporate zombie king tries to thwart them all while continuing his offshore experiments with the virus.

Much of the combat, as in previous Resident Evil outings, has a fast-paced style a la Blade, which you can imagine lends itself well to 3D effects and depth of field. Sure enough, when Jovovich makes her initial entrance, the 3D effects are great. Throwing stars fly toward the camera, swords impale a solider and stick out of the screen, bullets whiz past in slow motion toward viewers, and debris flies everywhere. All of this top-notch 3D is augmented by great surround sound effects, which really envelop you in the scene.

But then the director goes overboard, and the scene gets absolutely overkill with gunfire. The depth of field that seemed so good in this opening battle gets lost in the film’s eventual move to more panoramic shots. The 3D HUD elements on Jovovich’s videocamera logs pop off the screen and make you feel as if you’re looking through the lens, but they exist in scenes that otherwise feel flat. The most notable 3D scenes, in fact, all have to do with insane action, as when Jovovich jumps off a high-rise building with bullets flying by and zombie blood splattering the camera, or when The Executioner chases Claire through the showers swinging his scythe and charging through awesome 3D water. But taken as a whole, Resident Evil Afterlife on 3D Blu-ray just doesn’t seem all that dimensional, even though it was filmed natively with 3D cameras.

Like D-BOX, where the motion code sometimes “makes” the film, 3D has the potential to do the same for Blu-ray Disc releases. Not so with this movie, though; there are a few good 3D scenes, but not enough to compensate for the rest of the film. At least the 3D and 2D versions of the film are on the same disc, which is unique.

As with many 3D Blu-ray releases, the bonus features are all presented in two dimensions. Undead Vision is a picture-in-picture feature, while the Writer, Director and Producer Commentary is the type of thing you’d expect to find and hear in that sort of feature. The Deleted and Extended scenes follow the expected formula as well, with 6:48 devoted to a brief exposition between Alice and Claire Redfield, a scene of Alice making her own 25-cent shotgun shells, the guys preparing to open the door to the armored vehicle, and an extended scene before they get in the water. The Outtakes don’t fare much better, with 4:30 comprised predominantly of gaffes and scenes completely devoid of audio. Okay….

The Featurettes are a different story. These seven featurettes total 47:33 and range from an expose about director Paul Anderson’s obsession with Resident Evil to a feature about casting. Since this is a 3D Blu-ray release, it’s appropriate that one bonus feature is about the 3D technique and filing process. In this feature, Anderson equates 3D’s impact on video to surround sound’s impact on stereo audio: it takes it up a degree or five. Anderson and his team explain how they really had to think about specific scenes and whether they were necessary or not due to the time and quality required for a 3D image. There’s a lot of techno babble about camera types, how they film in 3D, the type gear they use and how they went to the same studio that James Cameron used for Avatar in 3D. Anderson also discusses the importance of things moving in the air to deliver a 3D effect, and he says fast edits can absolutely ruin a 3D effect (as we noted as well in our Clash of the Titans 3D Blu-ray review). Because of this, Anderson made his best 3D scenes slower (think “bullet time”), and it really shows in the scenes he uses as examples. Of all the 3D-related bonus features I’ve seen, this is far and away the best.

The featurettes are rounded out by one about the action/choreography, one about the visual design of an apocalyptic world, one about what “the undead” look like and how they move, and one about how the movie should look and feel like it’s part of the videogame franchise, from enemy types all the way down to at least one specific battle scene that takes place on the Arcadia.

Rounding things out is a Sneak Peek of Resident Evil: Damnation, a 1:10 trailer of the forthcoming CG movie. This brief look appears more insane and more action-oriented than we’ve seen to date from the Resident Evil series and takes place in the streets of a European warzone. Consider me in line, for sure.

But even though Resident Evil Afterlife is related to a game franchise, even though it’s one of a limited number of 3D Blu-ray Discs, and even though it’s got Milla “Fifth Element” Jovovich as the star, 3D TV early adopters may not want to be “in line” to pick this one up. Certain scenes have fantastic effects, and the coupling of 3D visuals and exquisite surround-sound can immerse you like no other multimedia experience. But those experiences are the exception rather than the norm, almost to the point of detraction. “If only the whole movie looked as good as that scene,” you’ll say. It doesn’t, even though the entire movie was filmed natively in 3D. Your best bet with this one is to let Afterlife not hit your home until it makes its way to the Aftermarket first.