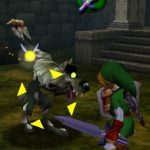 The rumor mill has been working overtime as of late with speculation that Nintendo will unveil the Wii 2 at E3. The speculation first arose due to Nintendo having not announced any major first-party titles for the second half of the year. This morning, Nintendo announced its Q2 lineup for both the Wii and Nintendo 3DS

, and although the info won’t quell any rumors about the Wii’s successor, it’s sure to fire-up the Nintendo fanbase simply by the inclusion of one game: The Legend of Zelda: Ocarina of Time 3D.

All told, Nintendo announced three new first-party titles set to release in Q2, two for the Wii and one for the 3DS

. On the Wii, Nintendo is preparing to release Wii Play: Motion on June 13, which will include 12 new motion-controlled games and be packaged with a black Wii Remote Plus. The second Wii game on Nintendo’s Q2 lineup is Mystery Case Files: Dust to Dust, which combines the seek-and-solve fun of the puzzle-based series with story elements, multiplayer modes and Wii Remote controls.

The Legend of Zelda veterans can look forward to the Master Quest, a second quest with revamped puzzles and redesigned dungeons that feature the same graphical and interface upgrades as the main game.

) brings the intrigue and sleuthing of Big Fish Games’ Mystery Case Files series to the Wii for the first time. The game transports players to the enigmatic Malgrave Island, where they must hunt for hidden objects and solve puzzles to collect a magically powerful dust scattered across the island. No drug jokes, please. Players can delve quickly into the game’s seek-and-solve action using the Wii Remote to examine multi-layered hidden-object scenes, locate concealed items and obtain inventory items that will help to overcome various puzzles. Multiplayer features allow players to team up and crack the case together or face off in a competitive hunt for hidden objects, but participating in those will require additional controllers.

Now, as for the third-party games, both the Wii and 3DS

has a slew of titles slated for Q2 release. Among the upcoming games for the Wii are Konami’s Karaoke Revolution Glee: Volume 2 and Disney Interactive’s LEGO Pirates of the Caribbean: The Video Game. Nintendo 3DS users can look forward to a May launch for Tecmo Koei’s Dead or Alive Dimensions, while Warner Bros. Interactive’s Green Lantern: Rise of the Manhunters is set to launch simultaneously for Wii, Nintendo 3DS and the Nintendo DS family of systems on June 7.