Bicycle kicks are some of the most spectacular displays of athleticism and sportsmanship a fan can enjoy in soccer. Most recently, Cristiano Ronaldo and Gareth Bale made our jaws drop with two of the best bicycle kicks in history of football. Now soccer super fans can relive the moment over and over in a new casual game aptly called the Bicycle Kick Challenge.

Bicycle Kick Challenge (BKC) is available from Pomu, a casual gaming website that offers a variety of titles that can be played online. BKC is playable directly from a web browser like Google Chrome or Mozilla Firefox.

BKC focuses on bicycle kicks themselves and not the whole game of football. The game is real simple to play. Players can choose a toon with either Bale’s number 11 or Ronaldo’s number 7. BKC essentially allows fans to emulate Ronaldo and Bale’s famous bicycle kicks seen in the Championship League games.

Once the player chooses a toon, they are transported to a football game in front of a goalie. The ball appears from a side of the screen and starts bouncing up and down. The challenge is for the player to position the toon in front of the ball and perform a bicycle kick.

The toon should be moved left or right with the mouse. A single click performs a wonderful bicycle kick. If the position and the timing is right, it will be a score. While the premise is quite easy to grasp, positioning the player to score a goal can be bit of a challenge. 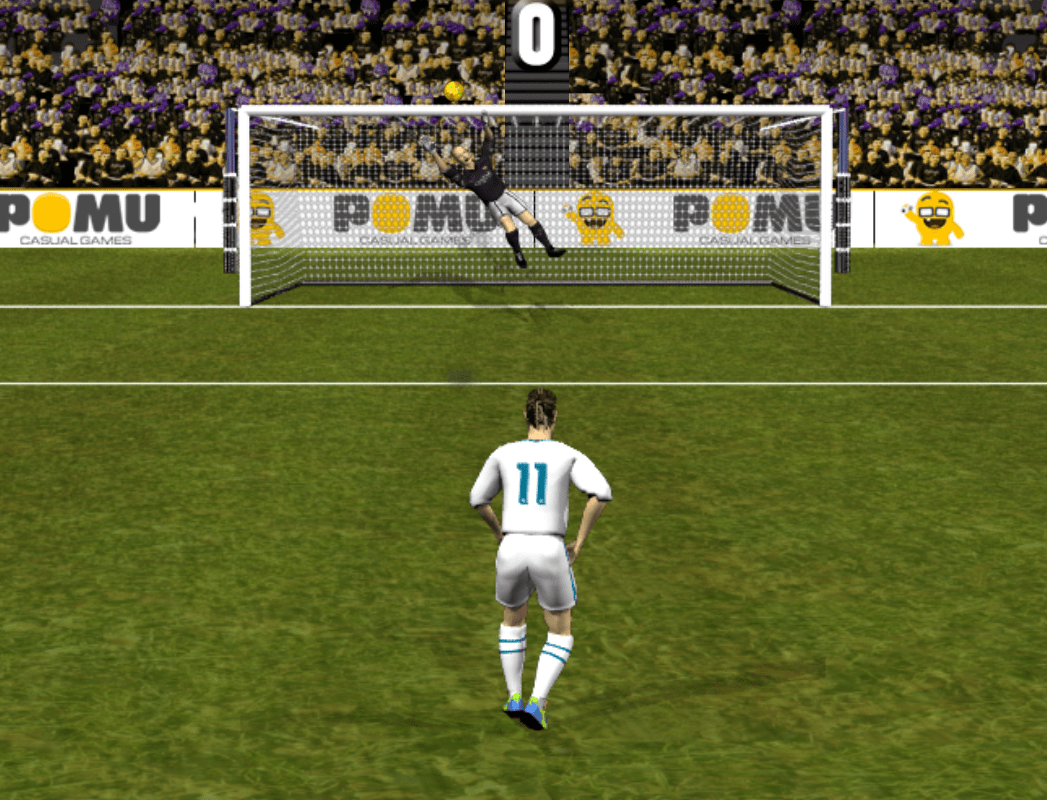 And the goalie is also an obstacle. At first it looks like the goalie doesn’t do much, but he does catch ill-timed or less powerful bicycle kicks.

The game is timed, which keeps the fun going and prevents the game from getting boring. There are in-game trophies players can unlock with the number of goals scored. The first goal is given a bronze trophy, kind of like a welcome gift. But more trophies are given for scoring 1,000 points or scoring a certain number of goals.

Players can keep on kicking to unlock the achievements. It’s all the more fun when playing against friends to see who can unlock a trophy first.

You can play the game by visiting Pomu’s page for the Bicycle Kick Challenge.

BKC is very simple designed. The toons are three dimensional and the football field with the stadium background looks realistic enough. For a time-killing casual game, BKC is surprisingly well made.

What really stands out is how fast the game plays. It takes less than three seconds to load in the browser. There is no lag unless there’s problem with the internet connection.

BKC is a supremely fun game to play when you are bored or just want to relive the historic bicycle kicks Ronaldo and Bale made. The game is really a must for football fans. It’s not overtly complicated, but can be quite thrilling to play casually.

Playing the game requires no downloading or signing up for anything, so that’s a major plus. Bicycle Kick Challenge is a wonderful game overall, even for those who don’t much care about football.