You are here: Home / Archives for 10 most popular zelda games of all time 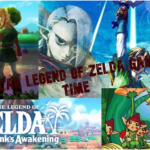 The Legend of Zelda is a classic video game series created by Nintendo. It has been around since 1986 with its first launch and has had 19 games released over the years on major gaming consoles, each with its unique atmosphere and style. Link, the adventurous hat-wearer, captivates players far and wide with his magical quests. From puzzling gadgets to menacing monsters - each installment brings a new set of fantastical tales, delighting fans everywhere in their wondrous exploration of this legendary franchise! And … END_OF_DOCUMENT_TOKEN_TO_BE_REPLACED