You are here: Home / Archives for Alice: Madness Returns 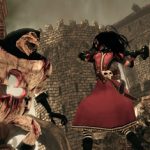 I was a huge fan of the original American McGee’s Alice, a somewhat-fringe PC game that took the already-twisted story of Alice in Wonderland and turned it on its sadistic ear. A slightly-mad Alice slicing her way through evil playing-card guards? Yep, the gameplay novelty rocked, but it was the environments and overall personality of the game that really won me over. When EA announced Alice: Madness Returns, I couldn’t wait to see what Mr. McGee had up his sleeve, and the fact that the original Alice was included as … END_OF_DOCUMENT_TOKEN_TO_BE_REPLACED

The dark and deranged fantasy/adventure Alice: Madness Returns is now available for PS3, Xbox 360 and PC, letting gamers play through American McGee's arguably twisted interpretation of the classic Alice in Wonderland fiction. Alice: Madness Returns is the sequel to the original PC hit American McGee's Alice, and now features a grown-up Alice finally freed from Rutledge Asylum for the Insane but still grappling with the horror and survivor's guilt of a fire that killed her family 11. In this sequel, Alice returns to … END_OF_DOCUMENT_TOKEN_TO_BE_REPLACED

Alice: Madness Returns is bound to be one of the weirdest games of 2011, if its predecessor is any indication of what EA's action game holds. However, it's also slated to be one of the most graphically original based on that same measure, with some wicked combat in store for Xbox 360 and PS3 owners. To give you a sample of just what that combat will look like, as well as an in-game look at the game's graphics and special combat abilities, we've got below a brand-new Alice: Madness Returns combat trailer, straight … END_OF_DOCUMENT_TOKEN_TO_BE_REPLACED