You are here: Home / Archives for Best gaming controllers 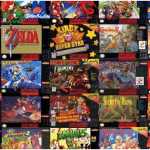 The SNES home video game console which was released in 1990 has been a favourite among all. With slowing in the advancement of technology, the gamers wanted to be able to these games on their PC, which led to the production of numerous controllers for the best experience among all. Since the SNES was a massive success, with the controllers that were introduced over time, one can re-live their teenage days with controllers having the best of features and smooth buttons that give an edge over others. With this being said, … END_OF_DOCUMENT_TOKEN_TO_BE_REPLACED