You are here: Home / Archives for brute.io best io games 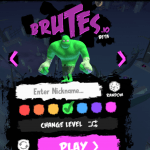 Today, we’re talking about something special. It’s a game you haven’t played before, but it might feel familiar. You already know how to play, despite never having seen this game. It’s not a sequel, and it’s not a rip-off—it’s Brutes.io. What the Brute?Brutes are monsters, simply put. They’re fighting machines, able to punch and knock out rival beasts in two seconds flat. Brutes come in many colors and costumes. When playing for the first time, you can choose a standard Brute in red, orange, yellow, green, blue, … END_OF_DOCUMENT_TOKEN_TO_BE_REPLACED

Sweet Bonanza by Pragmatic Play – Is It Worth to Play?