You are here: Home / Archives for Chicken Little 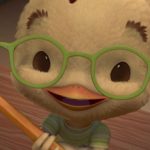 Chicken Little was the first movie I saw theatrically in 3D, so watching it at home via Blu-ray 3D was an oddly reminiscent experience. The story -- a young chicken sees the “sky” fall but tries desperately to repress it until all alien Hell breaks loose and he can’t -- does feel a bit dated, but at the time of Chicken Little’s theatrical debut you could overlook that because the technology was so novel. Now the novelty of 3D has worn off to a certain degree, at least in my corner of the world, so the story triteness is … END_OF_DOCUMENT_TOKEN_TO_BE_REPLACED