You are here: Home / Archives for clash of clan characters 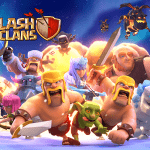 Like Candy Crush, Clash of Clans is a game that belongs in the big leagues of the mobile gaming world. One of the most popular games ever created, it was also one of the first war and strategy games to be launched on Android and iOS platforms in 2012. It is a role-playing game in real-time that features stunning graphics and engaging gameplay composed of fantastical navigation, establishing empires, building and fighting with armies and battle sequences, and even a competitive online ranking system! As is clear by … END_OF_DOCUMENT_TOKEN_TO_BE_REPLACED