You are here: Home / Archives for Final Fantasy XIV 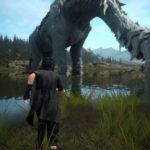 Later this year sees the arrival of the long-awaited follow-up to ‘Final Fantasy XIV’. It’s been 6 long years in the making and marks the longest period that fans of the series have had to wait between instalments. Thankfully ‘Final Fantasy XV’ will be hitting shelves this coming September which is simply music to many gamers ears. But of course with so much waiting around plans have had to alter slightly and the development of the game has had to go through a few twists and turns along the way. So the big question is … END_OF_DOCUMENT_TOKEN_TO_BE_REPLACED