You are here: Home / Archives for game of the year 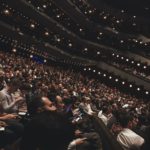 The Game Awards was founded in 2014 with a commitment to become the ‘Oscars of Gaming’, responding to the growing need for a platform to celebrate critically acclaimed and impactful work in what has, since 2005, become the largest media sector in the world, surpassing the film and music industries in terms of net worth.  With each year, the games industry has further coalesced around this ceremony, with smaller indie developers, in particular, having their fortunes impacted by picking up nominations and even … END_OF_DOCUMENT_TOKEN_TO_BE_REPLACED