You are here: Home / Archives for Kinect 2.0 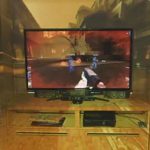 Forget about the next generation of gesture controls...it looks like Microsoft's next Xbox may include technology that turns your entire living room into a video screen. When the original Kinect released, people did all sorts of crazy stunts with it, including restructuring the hardware and turning it into a sort of 3D projector. Microsoft's Research department apparently had a similar idea, and their idea may be incorporated into the next Xbox ("Xbox 720") and/or into the next version of the Kinect Hardware ("Kinect … END_OF_DOCUMENT_TOKEN_TO_BE_REPLACED